What is the Consciousness Revolution?

Something is happening here. More people than ever in human history are living in a state of spiritual awakening. This is a new phenomenon and the world is about to change in a profound way.

While consciousness is an inner state available to anyone who wants it in an instant, the Consciousness Revolution is a massive transformation of society. Today, we’re mostly just reading, talking, and starting to get to know each other—but the revolution happens when we form loving, harmonious relationships with the intention of doing things together. We will naturally create the tools, technologies, systems and infrastructure to facilitate and support this state of freedom and abundance we have discovered.

Humans, today, are not the final product. The Consciousness Revolution is the next stage of human evolution. Today, we obey a world ruled by the ego. While we have learned to live in an awakened state even in this world, our lives will be much more fulfilling and enjoyable after consciousness goes mainstream and social structures begin to reflect our awakened state. As of now, the world is still ruled by centralized systems and institutions. Humans continue to be conditioned, manipulated, and systematically exploited through the centralized power of the state and its legal system, corporations, schools, the media, churches. But a crack in this miserable world order has opened and the light is about to shine through.

The Consciousness Revolution involves the creation of decentralized systems connecting people—ending separation and setting us free to live in freedom and abundance on our own terms. These decentralized technologies are already being developed and used. The wide scale usage of blockchain technologies such as Bitcoin, Ethereum, and other cryptocurrencies have shown that decentralization is possible. Many related startups, open source projects, and other collaborations are showing promise. One such example is the work of this author: a mobile app called “I am” by Infobeing (www.infobeing.com) which integrates all the infrastructure and tools needed to live in a decentralized state of freedom and abundance. The “I am” mobile app will be launched later this year. Who knows, it might even overtake Facebook.

Let’s enjoy this flowering of consciousness. Browsing these millions of inspired posts, connecting with beautiful people who are aligned in oneness—already perfect and complete. We know that it doesn’t really matter what happens in the world because the world isn’t real. Consciousness is what matters, not a revolution. We are not actually trying to change the world—or trying to do anything in particular. It’s just that, through us, heaven on Earth is about to emerge. We can just be ourselves, which is loving and creative. We are awake, we are fully-alive, and there is nothing to fear. We continue tomorrow and the day after that.

Could this be the answer to our ICO woes? 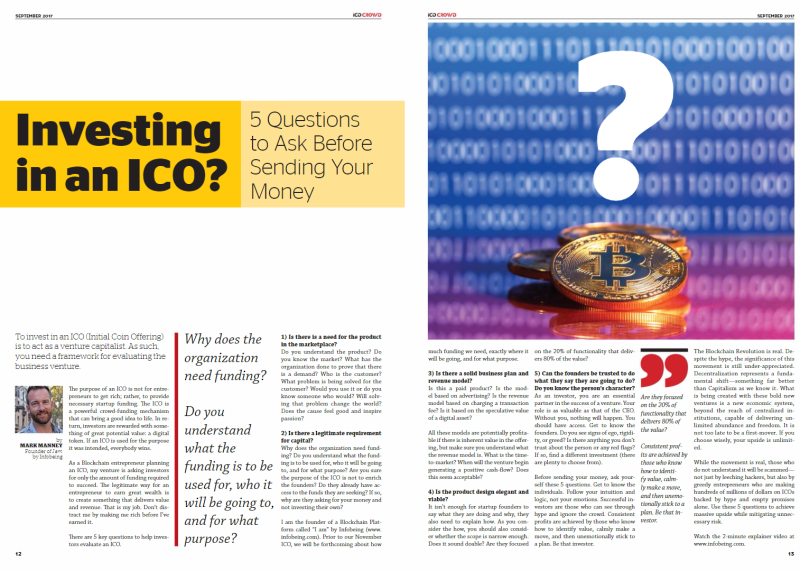 "I am" Partner & Investor Pitch

Let's try something different. Let's use technology as a portal into a new state of being.

The comfort zone is anything but

Introducing I am by Infobeing: Ethereum / Blockchain ICO Startup

I facilitate successful business and personal relationships. This requires a commitment to perfect honesty and acceptance rather than suspicion.

I also help people learn to live without fear, stress, or anxiety regardless of what is happening.

We can practice self-love and enjoy life even as we are more successful.

We can speak and live our truths, feel good all of the time, and boost immunity.

This requires that we learn the thought system of love rather than of ego. Subscribe for the free daily teachings and follow the links in the navigation menu for in-depth, free content.

Everyone who has applied these unusual ideas has achieved total success and ongoing, perfect joy.