The innocent see safety (A Course in Miracles)

When we are completely innocent, we have nothing to fear. It is only where we have lied, attacked, or acted lovelessly that we are vulnerable to punishment, counter-attack, or abandonment.

Safety is lack of fear. What is there to fear when punishment is not a real threat, when no secret can be revealed to hurt anyone...when, in the knowledge of our innocence, we know there is nothing to hide? True safety is the reality of innocence, and you are innocent in this present moment.

If you fear, you must believe you are guilty in the past and are allowing it to define your present. Come out from the dark. Tell the truth about the past, forgive yourself, and let it go. Deal with it lovingly in the present. If there is love in your life, you will be forgiven. If not, you will be released from a loveless situation.

You may have erred, but you must surely know you are innocent and good. Forgiveness means letting go of the error and making goodness real. The innocent see safety, and experience it as our ongoing state.

True faith is faith in love

Take your problems, your fears, your worries and offer them to the infinite power of love. They can only exist for you if love is being blocked or withheld in any way.

You can use whatever language or ideas that work for you, but the goal is not an embrace of or identification with any particular religion or belief system. Those are only tools and the practices, but true faith is faith in love.

May all the Christians, Mormons, Taoists, Buddhists, Hindus, Jews, Muslims, Athiests, Agnostics, Mystics and every single one of us agree on the one and only thing that we already do agree on: love.

Love is the answer to every challenge, the solution to every problem, the energy and thought system of God, the whole truth, the way and the light. According to my favorite book, "Sin is where love is not." (A Course in Miracles).

Now I ask a question to anyone who wants to answer, and I will respond to your answer: what problem exists in your life that love cannot solve? Please tell me and I will show you how to offer it to love, to solve it completely, here and now. 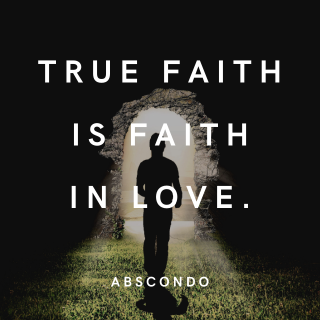 Twitter & Elon Musk demonstrate the nature of truth and reality

Eventually, the truth always comes out. Most people still don’t believe or understand this.

Your sharp, clever mind tells you that you can invent reality according your liking. Perception is everything. It is all relative. There is no black and white. Nothing is absolute. No matter your education status, the size of your vocabulary, or your external achievements—if you believe this, you are lost in confusion.

Lies are eventually exposed. Every one of them. Look no further than to what is happening on Twitter. Hunter Biden’s laptop. Hillary’s email server. Fraudulent elections. COVID lies. The true danger of the vaccine. The lies and censorship that was used to push all of it. On Telegram, Twitter, and in our human interactions, every detail has been out in the open for a very long time.

Or we can go back further, to the story of 9-11. The Iraq War. Think of all the corruption, the greed, the senseless violence, the exploitation. All of it is revealed to anyone willing to look. It’s right there. We know.

Then there are the lies in our relationships. The flirting with someone new. The cheating. The secretly spending money. The secret forms of substance abuse. The opinions we don’t tell our partners because of fear. The things we believe are inappropriate for our children to know or hear. The things we never told our parents or friends. The thoughts, beliefs, and experiences we’ve never shared for fear of being found out.

But every single lie—every form of dishonesty—is always revealed in time. It’s the nature of reality and there’s no avoiding it. When that happens, we panic and call it a crisis. When the truth is revealed, everything we were trying to achieve or prop up through dishonesty immediately crumbles. None of it was ever real. All this time, it was only an illusion.

At that point, the believer in dishonesty may continue to turn to dishonesty, to deny, to lie again, to explain it away…and the cycle never ends. Everyone sees it. This way of living, clinging to the illusion, believing you can get away with it, is hell. It is the road to ongoing suffering and frequent crisis.

Better to accept the nature of truth—which really only means reality. Speak the truth. Want the truth. Look upon everything true with forgiveness and love. We have all been conditioned to believe that dishonesty has power. In fact, belief in dishonesty is our greatest weakness.

To live in truth is to live in joy. There is no guilt or shame in truth. To align with truth is always noble. It is the restoration, the only way to earn trust, to move forward, to thrive.

As we look to the example of Twitter right now, Elon is shining a light on the truth and he is doing so within the thought system of love.

Many refuse to go along. They want to believe that we don’t know the truth—about what has been going on, about the very things they’ve done. We know. Anyone capable of looking upon reality with love sees it all, without any confusion.

This is the way—the only way forward for any of us, even Elton John. 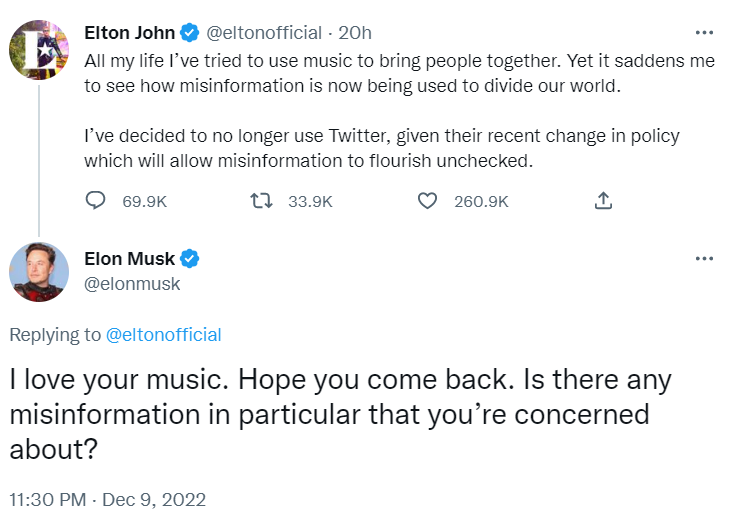