What protects madness is the belief that it is true. (A Course in Miracles)

No one recognizes their own insane beliefs and continues on with them.

Madness requires belief that our mind's ideas are correct and true.

Wisdom requires overcoming faith in, and identity with, your own stream of thought. It isn't true. It isn't you. Love, honesty, freedom, presence, the force of life itself, consciousness is real. Not thought forms. 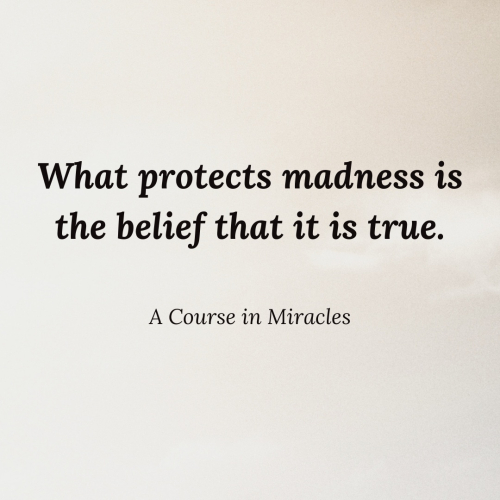 One of the lessons of the world is to look at conflict in terms of there being a winner and a loser. In any conflict, we are taught to identify with and fight for one of two opposing sides—fearing all the while that the other side will win.

Reality, however, is such that only illusion can be in conflict. Truth—the reality of the situation, the equilibrium, the path of no resistance—is absent of conflict. When two opposing parties both see and accept the truth, conflict disappears. Everybody wins. Absent of this, there can be no real victory.

It may appear that arguments and wars can be won by force. All throughout history, that’s how our foolish leaders have approached it. In the old winner / loser mindset, one side dominates, the other forfeits, and the victor dishonestly defines reality until the cycle repeats. This is precisely the model that, after thousands of years, has made an entire world that is based on fiction, illusion, unreality.

Then, one day about two years ago, COVID-19 was unleashed. Enter the Great Awakening—the Great War to End Illusion. The pandemic was unleashed because, prior to this, the Deep State / Cabal / Ruling Elite were attacked. What the media has not told us is that many of them were taken out at the highest level in a series of covert operations. COVID was the establishment’s response—their attempt to maintain control through the typical use of force, propaganda, lies, threats, fearmongering, corruption, etc.

The other side, you can call them the white hats or good guys, understood that the goal wasn’t to prevail through force; rather, to allow the effortless power of truth. What has been slowly revealed is the ugly truth of our healthcare system, big pharma, the propaganda in the media, the corruption in our governments, the sick experiments taking place in labs around the world—and how all these institutions were working together against human rights in lockstep.

The people we once trusted showed us their true colors. Even the sports leagues, the big brands, school, all of culture was exposed as corruptible and not exactly real. It was all turned off in an instant, and our lives shifted toward that which is real: loved ones, nature, spirituality, health, traditions, creativity, etc. So much pain and suffering society has thrown on us, but now we know what is real about life.

Russia’s operation in Ukraine isn’t really intended to conquer a land and a people; rather, to further expose the truth about the Deep State corruption, the global mafia that has been in charge there for so long. Far more important, this operation exposed the truth about how the SWIFT system has been used to threaten and control countries, how large corporations are bullying people and governments to achieve their agendas. Now we understand how the whole damn system has been working for our entire lives.

This is, indeed, the Great Awakening—an ongoing crisis to expose truth. Wherever any ugly truth is exposed, crisis always ensues for a time. After that, reality emerges. There are still a few more chapters in the Great Awakening. There is more light to be shone where there was once darkness and deceit. The goal is not world domination. To the contrary, the goal is that when all the sick and twisted illusion is exposed, we are left with a world based upon reality, truth, honesty, love, joy, fairness, and freedom. Nothing can stop what is coming.

When life comes to a point that a relationship or situation isn’t working—when it has become so toxic that it becomes impossible to go on—crisis ensues, and dramatic change is required. The challenge, in such a situation, is that our survival instinct tells us to continue holding on to the old situation. We tell ourselves to “try to make it work for just a little while longer. Maybe it will get better. It’s not the bad.”

Yet, by refusing to look squarely at the truth of a toxic situation, by resisting the necessary change, things only get worse. Suffering continues to escalate. Fear. Stress. It is like trying to hold back a dam that is breaking. Eventually it becomes impossible, and we are swept away in the flood of reality.

We are all in a terrible situation; a toxic relationship with the systems that govern our societies and with the people behind them who have been committing atrocities. We have been muzzled, threatened, and made to constantly fear, for two years, over a common cold. We are robbed through taxes that are used only to enrich the very same people in charge. We are censored. We are always worrying about money while those in charge print as much as they want for themselves.

They offer us only crap entertainment and miseducation, combined with medicine and food that make us sick—all while the system they put into place is slowly destroying the beautiful natural world we enjoy and depend upon. We know that drastic change is required. What we didn’t know is that it is coming.

The days ahead will shock anyone who hasn’t already awakened to what’s going on behind the scenes. The whole system is coming down. In it’s place, a new world is being offered to those of us who accept it. So many credible sources (the ones who have gotten every other “conspiracy” right again and again) have confirmed that it is a world with debt forgiveness, no income tax, prosperity for all, freedom and honesty, as well as an incorruptible financial system. It is a world of free energy, health care that heals—a great unleashing of all the technologies that those who have abused us have been holding back.

Prepare to encounter the unimaginable. Just when you think it is all over, it all begins. Facing the truth about things isn’t easy for any of us, but now there is no other choice. My awakening started after 9/11, and I have lived the past 20 years in a world that I have seen for what it is. All the while, I have known how completely wrong, sick, dishonest and evil the whole system is. I never dreamed of seeing the day when it all changes.

I don’t believe the new world will be perfect. Of course not, that’s not what this life is. Life is always going to be filled with enormous challenges, worries, ups and downs, but that’s what we are here for. But in the new world, we will be free to grow, to explore, to experience life as free people (rather than as slaves).

While I know this is a difficult time, which will only become unimaginably more so in an instant, I also know that this was a war that had to be waged. There was no path forward in the direction we were headed. We can be eternally grateful for the good guys who have just about completed the process of flipping the world, saving our lives from one of slavery, despair, or worse.

When the big events start happening, try to embrace it. Accept it rather than resisting. Let everything go that wasn’t really working before. Trust. Want truth. Want freedom. Know that love always prevails and, no matter what, live in and enjoy the present moment—where you are eternally safe and joyful no matter what happens in the world.