So I've disappeared into the recording process

I wanted to let everyone know that I've been very busy finishing the recording of my new album, Victory in a Landlocked Sea.

This has been a long, winding process.  Most of the songs were written two years ago and recording started 18 months ago.  So much has happened during that time and, through it all, the recording process has stopped and started again and again.  My wife and I had our first child, I wrote and published my first book, and so much changed in my life.  But as I'm listening now to an album that is probably 95% completed, I realize that it needed to take this long.  I needed to learn and to grow musically and this takes time.  But I can confidently say that I have reached another level as a recording artist and I'm very proud of this album.

The EP Fo(u)r Colors, which was released a year ago and was meant to be a promo / demo for the full-length album, was an important step in this process (though not the way I intended for it to be).  However, it is clear to me now that Fo(u)r Colors no longer belongs out there in the cybersphere, and so it will be taken down shortly.  The 4 songs featured on that EP will be included on the 12-song full-length called Victory in a Landlocked Sea.

As for the actual release of Victory in a Landlocked Sea, it may still be a while.  I'm setting a tentative release date of February 28th, 2012.  The artist in me wants to put it out there right away and give it away for you to hear immediately.  But I've also been doing this long enough to know exactly what will happen if I don't coordinate some kind of proper release of the album -- nobody will know about it and not many people will ever hear it.  So after the creative process is finished, I have to give myself time to do everything possible to find a path that will get these sounds and these ideas to an audience.

Will one or two songs end up on the site as a demo in the coming months?  Probably.  Will I include a few songs in the podcasts (which will continue)?  Maybe.  Will I share the album with friends?  If you ask me. :-)

Yesterday this interview aired on a show that supposedly has 460,000 listeners.  Click on the gray box below to listen:

The Switch is the eBook and Audiobook about using the power of honesty to enjoy life and avoid crisis. 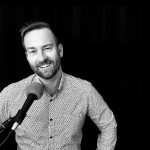 I’m Mark Manney, an American entrepreneur, writer, musician and digital nomad with a career in enterprise software sales. My Abscondo project is all about learning to enjoy life by loving unconditionally and telling the truth. It is a creative exploration of freedom that includes books, a podcast, a mobile app, original music and much more. Read full bio.