Like most of America, I've been intrigued by the events in Wisconsin over the past few weeks.  I actually grew up in small-town Wisconsin, about two hours from Madison.  My parents are working-class, Republican, and Christian.  I am a product of the excellent Public School system of that State.  Most of my teachers were truly decent people who instilled in me a strong sense of justice, fair-mindedness, and a keen understanding of right and wrong.

Wisconsinites are mostly simple, hard-working, honest, and solid people.  One of the highest compliments that one Wisconsinite can pay to another is to say that you are "down-to-Earth".  Well…18 years, two University degrees, two states, and one country later…now I can probably be described as anything but down-to-Earth.  Nonetheless, I'm always welcomed with open arms by my family and friends each time I visit.

When I watch those hundreds of thousands of protesters out there in Madison, I would be honored to call myself one of them.  I've been thinking a lot lately about the idea of solidarity.  I've been asking myself who I should support here: the Union-busting, budget-controlling, tax-cutting, renegade Republicans in the state (led by their own Governor Scott Walker)?  Or should I support the protesting teachers, public workers, idealistic students, and policemen?  I guess I don't have a direct stake in either side.  That might sound selfish, but what I realized is that this does come down to something very simple: self-interest.

The Republicans and their extremely wealthy, elite funders are interested in destroying the Unions to protect their own self-interests.  They want to be able to pay for more tax cuts for corporations and for the rich.  They want to undermine the current educational system so that they can have better control over the curriculum.  Quite simply, the goal behind this bill is to cut programs that benefit the middle-class so that they can get their hands on even more money (even if it comes from the paychecks of hard-working state employees).  They’ll never have enough because there is no limit to self-interest.  I guess they have every right to look after themselves and to do whatever they wish in order to advance their cause.

At the same time, every single tax-payer, teacher, public employee, police officer, librarian, and anyone else who feels compelled to go out there during the freezing-cold Wisconsin Winter also has every right to look after their own self-interests.  In my view, this isn't necessarily even about what is right or wrong.  After all, it is apparent that arguments concerning right and wrong don't go very far in today's global economy anyway.  We are living in an increasingly brutal world of diminishing resources, environmental destruction, financial scandal, insurmountable debt, and declining economies.  In these next years and decades, we will increasingly be thrown into a battle for resources and survival.

The wealthy elite, those few thousand people who control an enormous amount of the world's resources...they understand this.  They are using any means necessary, popular or not, honest or not, decent or not, to get everything they want.  They care nothing about everyone else.  There is no goodness or morality in their decisions, in their actions, or in their character.  They do things only because they can.  They are calculative and heartless in their greed and they never will be any different.  They are invisible ghosts in their ivory towers and in their gated communities on some remote island.  Yet their work remains visible to us in everything we do.  After all, they are in control of a system that they have designed and they control.

Who are these people?  They are the elite bankers, corporate board-members, and the Fortune 500 Executives.  They are supported by an enormous network of politicians who they have purchased (practically the entire national Democratic and Republican Parties).  They also own the media.  They do all of this for one reason: to get more for themselves.  And more for them naturally means less for the rest of us.

So what can the rest of us do to fight for our share?  After all, we are all part of a Capitalist system and are all motivated by our own, selfish interests too, right?  Are we not all trying to give our children a better life, earn a better education for ourselves, buy healthier food, have a little fun, do some traveling, save some money, and live in some degree of health and comfort?  There is a market demand for quality of life and, regardless of whether we are Liberal or Conservative, we should feel no shame in pursuing our own self-interests, right?  The question is, how can we win in the game we are playing in this casino designed by and controlled by the increasingly powerful elite?

We can work hard on the job.  When we please our employers, they tend to give us enough to keep us around.  We can work hard in school.  When we educate ourselves, we become more valuable to a business or government employer.  We can negotiate effectively as individuals when we apply for jobs.  We can start a business that serves others.  We can save more of the money we earn so that we become a bit richer ourselves and less dependent upon the already-rich.  But sometimes this still isn’t enough...not when we are under attack by a relentless elite (like Wisconsin currently is).

The wealthy elite use their power to control the government, the companies we work for, and the media.  But the primary advantage “We the People” have is in our numbers.  There are only a few thousand of them.  But there are millions of us in America and billions others around the world.  If some of us happen to decide that we will not continue to act, as we have been, as peasants…if we decided that it is in our self-interest to go out and fight as a collective…if some of us want to negotiate through the collective power of a Union…if some of us want to take to the streets and fight, then my only response is that this is your natural right.  Your unquestionable right to do this goes beyond morality, ideology, or argument.  The question is not whether or not you should, the question is how far are you willing to go?

Oh, and anyone in our lives, in our media, or in our government that takes the side of the wealthy elite in this struggle is either 1) working for them, or 2) fooled by them.  Pay no attention.  You have a right to live your life just like the billionaires do.  Stand tall and fight like you mean it.

Taking a break from the podcast for a few weeks

With the book launch and the massive number of radio interviews I'm doing in the coming weeks, I have decided to put the podcast on hold for a few weeks.

In the meantime, check back for new blog posts and other updates!

I'll be doing many more book interviews in the coming weeks and months.  However, I decided not to turn the Abscondo Blog into nothing but a steady stream of political book interviews.

That said, if you'd like to come with me over to the seedy underworld of American Talk Radio, you can listen to my radio interviews here or on the book site.

Book Interview with the Jay Boatman Show on KCAA

Click on the gray box below to listen to yesterday's interview with Jay Boatman on KCAA in San Bernadino, California.

Interview with the Jay Boatman Show

I'm excited to announce that Love It or Leave It: The End of Government as the Problem, is now available at iTunes and other digital music outlets.  Given the format and subject-matter of the book, my opinion is that the audiobook version is the preferred experience.

The book is also now available on Kindle. 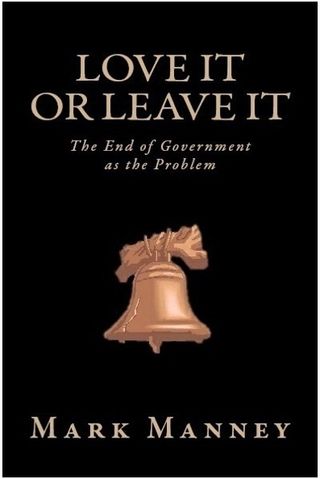 Click on the gray box below to listen to this week's Abscondo Podcast:

This week, rather than the usual podcast format, we're sharing a segment from a recent interview to support my upcoming book, Love It or Leave It: The End of Government as the Problem.

I had a lot of fun with the interview.  Liberty Talk Radio, with host Joe Cristiano, is a small Internet radio show.  Nonetheless, the phone lines really lit up throughout the show.  I'll be doing many more interviews in the coming weeks and months, but wanted to share the first.