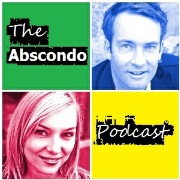 The Abscondo Podcast is available for free on  iTunes.  It is also accessible via this direct feed or wherever you normally get podcasts.  You can also receive an email alert whenever a new   episode is available by submitting your email address here:

The Abscondo Podcast includes conversations between people who are exploring new ideas and seeking truth.  The show is hosted by Mark Manney, an American writer, recording artist, and social comentator who lives in Eastern Europe with his wife Sofia (the show's co-host).  The podcast features interviews with inspiring people, intense conversation, and original music.

Take part in the conversation by leaving us a message at (206) 905-1386.  Write to us at abscondomusic@gmail.com.  We'll respond to your message on the next episode or even invite you onto the show as a guest.

The new Abscondo project (and update on life events)

The last two weeks have been some of the most difficult weeks of my life.  On February 28th, I experienced the once-in-a-lifetime joy that was the birth of my first child, Isabella Sofia.  I shared just 8 precious seconds with her in the hallway of the hospital after my wife's C-Section, and then they rushed her off.

That morning, when it became clear there was nothing left for me to do in the hospital, I drove home with feelings of joy quite unlike any other.  Though it was a cold, gray morning in Kosice, I celebrated on my balcony by drinking some champagne and smoking a cigar.  Life felt "right" and simply wide open.

Not long after, I went inside to warm up and grabbed my guitar.  In just a few minutes, under a new kind of inspiration, I came up with a new song that captured the exact feeling of, and meaning of, that morning.  I emailed it to my wife, who listened with tears of joy while recovering from surgery.

But the pure happiness didn't last long, as in just a few hours we began to learn about our daughter's terrible heart and lung problems -- a result of her lungs being filled with fluid.  After a few days of shock and disbelief, after seeing her barely able to breath enough to keep her oxygen levels up, she was transferred to another intensive care unit in another hospital and put on a respirator.  Long story short: it is 2 weeks later and she is still in an incubator, making only small improvements.  The doctors say her prognosis is good, but nearly each day has brought new and unexpected challenges...ups and downs.  The process has been long, frustrating, and filled with moments of fear and doubt.

The truth is, I was quite reluctant to become a father.  My life was great just as it was and I didn't want to mess it up. :-)  Yet, after I had seen her face for those first 8 seconds, I felt that now I could not imagine a life without her in it.  The eventual uncertainty about her health and survival only made these feelings more intense.  I don't just want "a child", I fucking want her!  She is so beautiful and right...I simply fell in love with her.  Even in this situation, she has a power to make me feel better when I am in her presence...even if we are separated by incubator walls and even if she has scary tubes going into her nose.

But something else has come even more into focus.  These past two weeks have been the most creative of my life.  My music has provided so much strength and power.

During this time, I've written a few exciting new songs (maybe my best ever) and even did a lot of recording.  I'm also working with a professional keyboardist, Martin Ferencik (who's played with several top Slovak bands), and I'll begin recording with him this Saturday.

The next Abscondo release will be unlike anything I've done.  It will feature not only acoustic guitar, but piano / synth sounds, female backup vocals, drums in parts, and an all-around much more "professional" sound.  The strength of the release, however, will be my new style of songwriting.  The tone will be less dramatic and dark.  Ironically, it will be much more optimistic and uplifting (though, hopefully, in a somewhat twisted and subversive way :-D).

As a first step, I plan on releasing a free, 4-song EP as a sort of "demo" of this new sound (though there are already 10 - 12 very strong songs ready to go for the album).  The EP will be available for download, before summer, from this website.  While the EP will be free at least temporarily, the current plan is not to maintain the rights and not release it via Creative Commons (at least not in the near future).

As for the full album, I will be exploring ways to reach an even larger audience and will be seeking support for a commercial release.  If, after some time, I determine that the best way to reach the largest audience is instead through Creative Commons, then that is what I will do.  But my plan is to take this far and wide.  This is really good stuff.  It feels good to see my musical future as Abscondo coming further into focus and taking shape.

As for my day-to-day struggles with my daughter's health condition, I do expect a full recovery and believe it is only a question of time.  When she finally does come home, she will be embraced into a home full of never-ending love, music, ideas, and art.